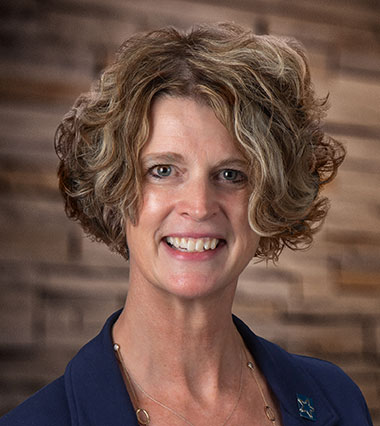 BIOGRAPHY
Donna Lamberti joined Christian Brothers Services in 2021 as Executive Vice President, bringing with her a wealth of experience, including 30 years as a CPA in public accounting. During her career, Donna has served ministries across the U.S. and abroad.

Prior to joining CBS, Donna served as the Controller of the Congregation of Holy Cross since 2001, where she provided invaluable leadership and financial guidance, benefitting the entire Congregation and its ministry needs across the globe. During her tenure, Donna executed critical financial and capital needs planning. She was instrumental in several projects, including the implementation of a new investment model and strategy for the U.S. Province’s investment portfolio.

Also at the Congregation of Holy Cross, she served as the primary liaison with both Chilean and American consultants, preparing and developing financial structures that serve the international congregation. Donna oversaw implementation of a complete restructuring as a result of the 2012 merger of the Congregation of Holy Cross Indiana and Eastern Provinces, including the establishment of three trusts and one new U.S. Province corporate entity, and she administered the creation of a technology platform for religious annual budgeting, simplifying the process for more than 300 religious community members.

Donna has a long relationship with CBS, having served as a Trustee in the Christian Brothers Services Employee Benefit Trust since 2016, and serving as the Audit Committee Chair. Donna received her B.A. in accounting from Oregon State University in Corvallis, Oregon.