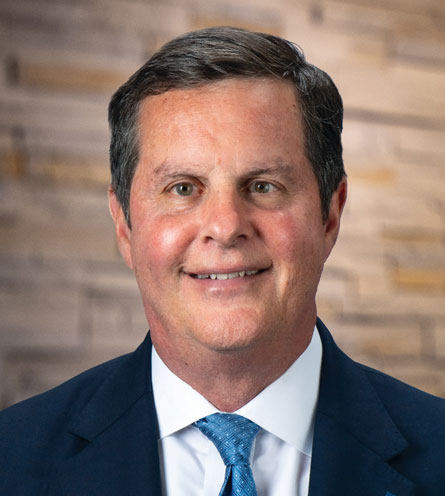 BIOGRAPHY
Patrick Lynch joined Christian Brothers Services as President/CEO in 2022, bringing three decades in the financial services and banking industries to the position. His experience includes serving 21 years as Founder, President, & CEO of Chicago Equity Partners, formerly a division of Bank of America, which became a fully independent boutique investment advisory firm in 2000. Pat led the firm’s executive team, comprising the CFO, Chief Investment Officers, General Counsel/CCO, and the heads of technology, sales, marketing, and client services, as well as a staff of 40. Before taking on that role, Pat was a Senior Vice President with Bank of America for 10 years.

As the first layperson to serve as President/CEO at CBS, Pat is committed to supporting the company’s Catholic identity and Lasallian heritage. Throughout his career, Pat has advocated a “pay forward” philosophy to help new generations of students obtain Catholic educations. He serves or has served on several Boards with ties to Catholic education and philanthropy, including 12 years as a Board member and Trustee of his alma mater, Loyola University Chicago. During his tenure, Pat chaired the Finance Committee, as well as its Executive, Compensation, Investment, and Audit Committees, helping to shape strategy for hundreds of millions of dollars in annual revenue for the university. He also served as the Vice Chair on the university’s Council of Regents, and is a member of Loyola’s Baumhart Center for Social Enterprise & Responsibility’s Leadership Council, which guides the Center’s efforts to foster just, humane, sustainable social business practices.

Pat also served as the Chairman of the Board of Trustees and as a Trustee at St. Ignatius College Preparatory School in Chicago; Chairman of the Board of Directors and Board member for the Catholic Education Foundation, and as a Board member at Catholic Charities, both for the Diocese of Joliet.
Pat received his Bachelor of Business Administration degree in Finance from Loyola University Chicago, and a MBA in Finance from DePaul University, Chicago.